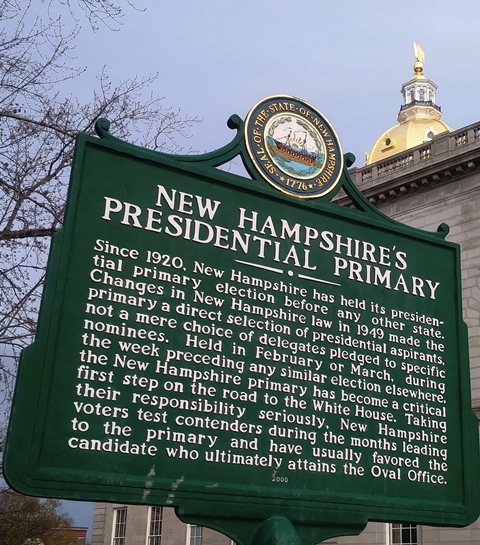 607-A:2 Rights Lost. –
I. (a) A person sentenced for a felony, from the time of his or her sentence until his or her final discharge, may not:
(1) Vote in an election, but if execution of sentence is suspended with or without the defendant being placed on probation or he or she is paroled after commitment to imprisonment, the correctional facility shall provide the offender written notice that he or she may vote during the period of the suspension or parole; or
(2) Seek the nomination of a political party or become a candidate for or hold public office.
(b) In this paragraph, "final discharge" means the release of a prisoner from incarceration.  A person who is on probation or parole shall be considered to be finally discharged for the purpose of this section.
II.  A public office held at the time of sentence is forfeited as of the date of the sentence if the sentence is in this state or, if the sentence is in another state or in a federal court, as of the date a certification of the sentence from the sentencing court is filed in the office of secretary of state, who shall receive and file it as a public document.  An appeal or other proceeding taken to set aside or otherwise nullify the conviction or sentence does not affect the application of this section, but if the conviction is reversed the defendant shall be restored to any public office forfeited under this chapter from the time of the reversal and shall be entitled to the emoluments thereof from the time of the forfeiture.


607-A:3 Rights Retained by Convicted Person. – Except as otherwise provided by this chapter or by the constitution of this state, a person convicted of a crime does not suffer civil death or corruption of blood or sustain loss of civil rights or forfeiture of estate or property, but retains all of his rights, political, personal, civil, and otherwise, including the right to hold public office or employment, to vote, to hold, receive, and transfer property, to enter into contracts, to sue and be sued, and to hold offices of private trust in accordance with law.